How to be legal with my bike on May 18th! On April 17, the Quebec government adopted a new bill involving several changes in the visibility of cyclists. This bill, which will be sanctioned on May 18, provides for important sentences for those who do not meet the new standards. Among these, each bike must be equipped with a red reflector at the rear, a white reflector at the front, reflectors in the spokes of the two wheels visible on both sides and yellow reflectors to the pedals.

To comply with the law and not receive a ticket, you must: 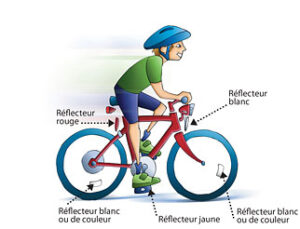 At SenditGear, we have THE ideal solutions to allow you to ride legally while keeping the characteristics (weight, aerodynamics, great looks) of your bike! Here are our products.

Add some extra visibility to your bike. The REFLECTIVE FRAME KIT provides an assortment of 16 reflective labels to adapt to any type of bicycle frame. From high-viz yellow to stealth black.

The FLECTR Reflective Frame Kit is available for only $ 19.99 in several colors.

The first rim reflector with 360 ° visibility. The arched profiles of modern bicycle rims offer multiple plains for reflection – a perfect base for FLECTR 360. The two-part FLECTR 360 surrounds the rim on both sides and overlaps on the rim top. Wide angle reflection and no guaranteed space.

FLECTR ZERO is the world’s first bike reflector for your wheel, combining elegant design with advanced thinking and exceptional aerodynamics. Beyond, it is light and indestructible. Thin paper it fits every spoke like a glove.

You can click here to read all the details of the new law project (French only): Law Project no.165